The Rite of Christian Initiation
​for Adults (RCIA) 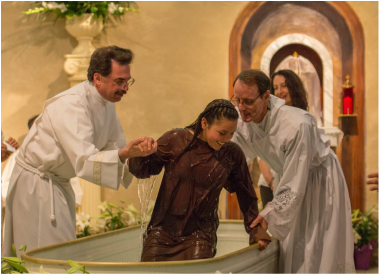 The Rite of Christian Initiation of Adults (RCIA) is the way that the Catholic Church helps people enter into life as an adult Catholic by teaching and answering questions about the Catholic Faith. (For the purposes of Christian initiation, people are considered adults at the age of 16.) It is the official process that prepares and initiates people into the Catholic Church through the sacraments (e.g., Baptism, Confirmation, or Holy Communion).

RCIA is the modern form of the catechumenate of the early days of the Church. Becoming Christian in the first five centuries involved a sharp break with the surrounding Roman culture. New Catholic Christians entered into a way of living which demanded deep commitment and often risked their lives to become Christian. In the modern world, our faith also demands deep commitment, for our beliefs and the beliefs of our society are often in tension.
The RCIA Process

To get started in RCIA, you need only meet with the RCIA Coordinator who will discuss your current status and help you get started. When you begin the process, there is no obligation to continue on your part. The first meetings are your chance for you to ask questions, receive the good news of the Catholic Christian life, and open the way for spiritual growth.

Stage One (Inquiry): in the Inquiry classes (also known as Precatechumenate). During this time, basic teachings of the Church are introduced and ample time is given for questions. This period often lasts for several months, but can continue for as long as one wishes to attend. After some time in Inquiry, those who are ready may choose to enter into a deeper relationship with the Church and begin their formal preparation for the Sacraments of Initiation.

Stage Two (Catechumenate): At the Rites of Acceptance / Welcoming, inquirers enter into the next stage of RCIA known as the Catechumenate. This is a period of more intense theological preparation for the reception of the Sacraments. This period often lasts between one and two years. The program may vary depending on which sacraments are needed (for example, a validly baptized Christian from a non-Catholic background will not be baptized again).

Stage Three (Purification & Enlightenment): As Easter approaches, those who will be received into the Church will attend the Rite of Election at the beginning of Lent. The Elect are then immersed in the Church’s prayers and love to prepare for fruitful reception of the Sacraments of Initiation: Baptism, Confirmation, and Holy Communion. (There are other processes for those who have already received one or more of these sacraments.)

​Stage Four (Mystagogy): After reception of the Sacraments of Initiation, RCIA continues for a time known as Mystagogy. During this time, new Catholics (“Neophytes”) spend time learning more deeply about the practices involved in the Catholic life and community.