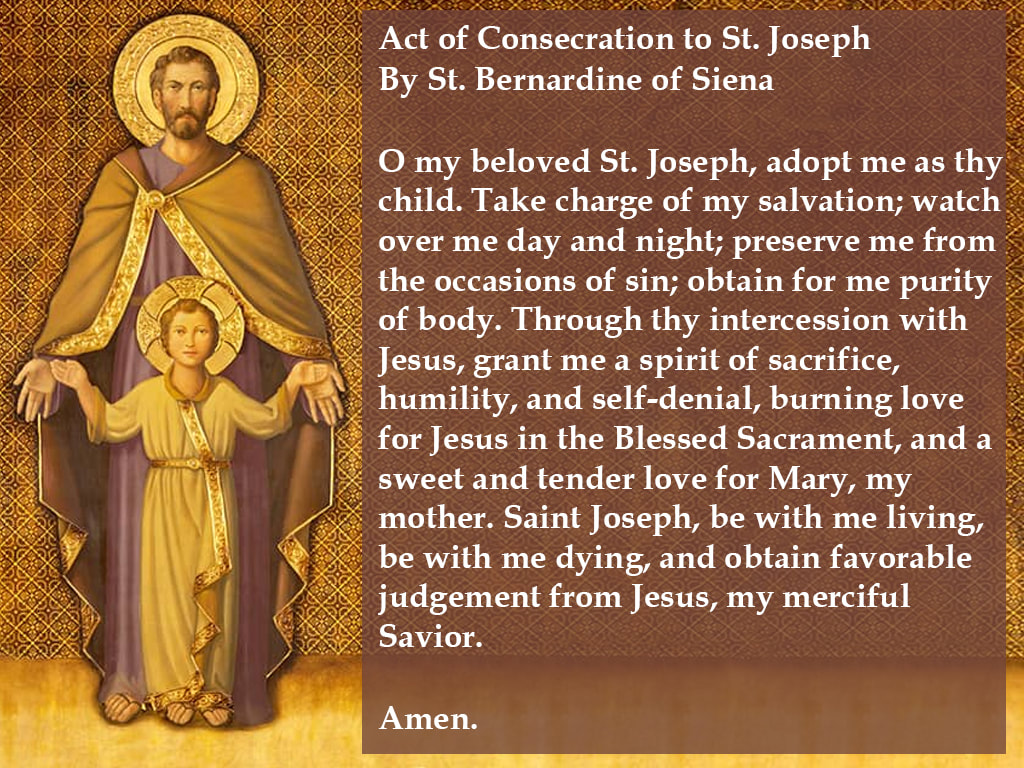 ​What is a Consecration?

Consecration means “to make holy.” Holiness, in turn, refers to the separation of something from the common, worldly, or profane. While all Christians are to be separate from the world (2 Cor. 6:17), consecration also includes the idea of being set aside for sacred use.
So, whether you eat or drink, or whatever you do, do all to the glory of God.
(1 Corinthians 10:31)
Originally having a liturgical priestly significance referring to the dedication of sacred objects (a bishop, a church, an altar, a chalice, or a paten), the term came into popular usage to denote personal devotion in the 17th century (most famously by St. Louis de Montfort). Pope St. John Paul II used various terms for these personal devotions so that the popular idea of consecration could be more easily understood. His preferred term was entrustment.
​
Entrustment here means to give oneself and life into the care of another. This entrustment is not limited to overtly religious or spiritual things but covers all aspects of our lives. Jesus is Lord of all! So we know we can entrust everything - our relationships, activities, desires, struggles, habits, etc. - to his care. We undertake a consecration to know and experience more fully Jesus’ presence so we can rejoice and be glad in every aspect of life!
​What is a Consecration?

Why Consecration to St. Joseph?

​When one makes an act of consecration to a saint, it is made ultimately to God through the help of the saint. We know that Joseph was a lowly carpenter, betrothed to Mary, a just man, ever ready to carry out God’s will. Blessed Pius IX declared St. Joseph “Patron of the Catholic Church.” Venerable Pius XII proposed him as “Patron of Workers.” Saint John Paul II called him “Guardian of the Redeemer.” St. Joseph is universally invoked as the “Patron of a Happy Death.” After Mary, the Mother of God, no saint is mentioned more frequently in the papal magisterium than Joseph, her spouse. (Pope Francis, Patris Corde).
When Joseph woke from sleep, he did as the angel of the Lord commanded him.
(Matthew 1:24)
Jesus and Mary entrusted themselves entirely to the care and protection of St. Joseph as the head of the Holy Family. Consecrating oneself to St. Joseph is an act of entrustment to his fatherly care, protection, and guidance. It basically means acknowledging that as Jesus is your spiritual brother, and Mary your mother, Joseph is your spiritual father.
Whoever does the will of my Father in heaven is my brother, and sister, and mother.
(Matthew 12:50)
As Fr. Donald Calloway, the author of the St. Joseph consecration, writes, “We need the spiritual fatherhood of St. Joseph to help us protect marriage and the family. Marriage and the family have always been under attack, but in modern times, the threats have reached extraordinary heights… To combat and overcome Satan’s deceptions, the Church needs St. Joseph.” (Consecration to St. Joseph: The Wonders of Our Spiritual Father, 4)
The goal of this consecration is to imitate St. Joseph’s virtue, example, and closeness with Christ. Of course our goal in all things is to become closer to Jesus! Similar to the way in which many who have drawn closer to Mary are in turn brought closer to Jesus, those who dedicate themselves to St. Joseph will find themselves in a deeper relationship with the Son of God.

Jesus came into the world through Mary. Thus, we can go through Mary to develop our spiritual brotherhood with Christ. St. Louis Marie de Montfort developed the consecration to Mary, in order to help bring people closer to her son.
As Pope St. John Paul II explained, “Consecrating ourselves to Mary means accepting her help to offer ourselves and the whole of mankind to him who is holy, infinitely holy; it means accepting her help [and] tends essentially to union with Jesus.” (Consecration of modern world, Fatima Mass - May 13, 1982)
“Behold, your mother!”
(John 19:27)
Consecration to St. Joseph, however, does not conflict with (nor take the place of) a total consecration to Mary. As Fr. Calloway points out, we're not children of a one-parent spiritual family! (Consecration, 5)
Just as devotion to one’s father in no way implies less devotion to one’s mother, a total consecration to St. Joseph does not threaten one’s consecration to Mary. Rather, it complements it.

On the feast of St. Joseph (March 19th, 2021), our parish will be consecrated to St. Joseph. To fully participate in this consecration, Fr. Sam is strongly urging that individuals and families consecrate themselves to St. Joseph as well. This 33-Day personal consecration will begin on February 15th  and come to fruition at a special parish consecration Mass on March 19th- the Feast of St. Joseph the Spouse of the Blessed Virgin Mary.
The consecration itself is found in Fr. Calloway’s book Consecration to St. Joseph: The Wonders of Our Spiritual Father (Marian Press, 2020). You can buy this book at www.consecrationtostjoseph.org or online at www.stjmod.com at a discounted price (limited quantity). The book is for those who want to commit to consecration, or those who simply want to follow and learn more about St. Joseph.
The consecration is modeled after the well-known consecration to Jesus through Mary. During each of the 33 days of preparation, you'll spend about 20-30 minutes focusing on a line from the Litany of St. Joseph. Along the way, you’ll learn about saints and mystics who were devoted to St. Joseph, the religious communities that were founded in his name, shrines dedicated to him around the world, and apparitions where he has appeared.
Consecrate yourselves, for tomorrow the LORD will do amazing things among you.
(Joshua 3:5)
​Many of you joined in the personal consecration to St. Joseph last year, and some may not be sure about making this act of devotion right now. Those who do not yet plan to be personally participating in the consecration are still encouraged to study the material in the book (especially Section 2) in solidarity with your fellow parishioners.
We look forward to coming together as a parish family under the guidance of our patron and spiritual father, St. Joseph in this year dedicated to him!

Special Indulgences in The Year of St. Joseph

In addition to the consecration, faithful Catholics can gain special indulgences for devotional acts during the 2021 year of St. Joseph. As always, indulgences are either partial or plenary. Plenary indulgences remit all temporal punishment due to sin (i.e., Purgatory) and must be accompanied by full detachment from sin, sacramental confession, Eucharistic communion, and prayer for the intentions of the Pope. The subject must have at least the general intention of acquiring the indulgence and must fulfill the enjoined works in the established time and the proper method. Failing these conditions, an indulgence will be partial (remitting some temporal punishment due to sin).
As reported by Catholic News Agency, according to the decree, there are several ways to receive such indulgences during the year of St. Joseph.[1] These include:

[1] “The elderly, the sick, and the dying who are unable to leave their homes due to the coronavirus pandemic also have special permission to receive an indulgence by ‘offering with trust in God the pains and discomforts’ of their lives with a prayer to St. Joseph, hope of the sick and patron of a happy death. The decree noted that in this instance the person must have the intention of fulfilling, as soon as possible, the three usual conditions for an indulgence, as well as a detachment from sin.” (https://www.catholicnewsagency.com/news/fifteen-ways-to-gain-an-indulgence-in-the-year-of-st-joseph-81304)