Marriage is the intimate union and equal partnership of a man and a woman. It comes to us from the hand of God, who created male and female in his image, so that they might become one body and might be fertile and multiply (See Genesis chapters 1 and 2). Though man and woman are equal as God’s children, they are created with important differences that allow them to give themselves and to receive the other as a gift. 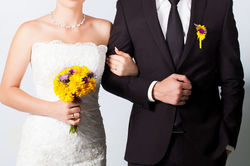 Marriage is both a natural institution and a sacred union because it is rooted in the divine plan of creation. In addition, the Catholic Church teaches that the valid marriage between two baptized Christians is also a sacrament – a saving reality and a symbol of Christ’s love for his church (See Ephesians 5:25-33). In every marriage the spouses make a contract with each other. In a sacramental marriage the couple also enters into a covenant in which their love is sealed and strengthened by God’s love.

The free consent of the spouses makes a marriage. From this consent and from the sexual consummation of marriage a special bond arises between husband and wife. This bond is lifelong and exclusive. The marriage bond has been established by God and so it cannot be dissolved.

In the Latin Rite of the Catholic Church, the priest or deacon, the two official witnesses, and the congregation all witness the exchange of consent by the couple who themselves are considered to be the ministers of the sacrament. In the Eastern Churches the sacrament is conferred by the priest’s blessing after receiving the couple’s consent.

Permanency, exclusivity, and faithfulness are essential to marriage because they foster and protect the two equal purposes of marriage. These two purposes are growth in mutual love between the spouses (unitive) and the generation and education of children (procreative). 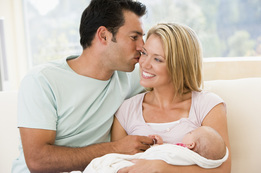 ​The mutual love of a married couple should always be open to new life. This openness is expressed powerfully in the sexual union of husband and wife. The power to create a child with God is at the heart of what spouses share with each other in sexual intercourse. Mutual love includes the mutual gift of fertility. Couples who are not able to conceive or who are beyond their child-bearing years can still express openness to life. They can share their generative love with grandchildren, other children and families, and the wider community.

As a result of their baptism, all Christians are called to a life of holiness. This divine calling, or vocation, can be lived in marriage, or in the single life, or in the priesthood or consecrated (religious) life. No one vocation is superior to or inferior to another. Each one involves a specific kind of commitment that flows from one’s gifts and is further strengthened by God’s grace. All vocations make a unique contribution to the life and mission of the Church.
​
The family arises from marriage. Parents, children, and family members form what is called a domestic church or church of the home. This is the primary unit of the Church – the place where the Church lives in the daily love, care, hospitality, sacrifice, forgiveness, prayer and faith of ordinary families.

An initiative of the United States Conference of Catholic Bishops including help for preparing for marriage and making the most of the sacrament. Click the image above for more information on the Marriage.

Want to get married here at St. Joseph's Catholic Church?